The world is on pause right now as it collectively battles the fast-spreading Corona Virus aka Covid-19. The proactive and preventive measures governments worldwide are taking in order to slow down the spread of the virus are unprecedented in modern times. From Shelter-in-place orders in California and New York City and social distancing measures across the rest of the country, governors are urging citizens to stay home as much as possible in order to prevent spikes in Corona Virus cases from inundating our already overloaded hospitals and healthcare facilities.

All non-essential businesses have been ordered closed in an effort to prevent mass gatherings of people. Cities around the world have come to a virtual standstill, with eerily empty roads and highways sitting quietly like something out of a post-apocalyptic movie. Since many of these measures went into effect early last week, millions of people across the country became unemployed overnight, as their “non-essential” jobs evaporated before their eyes. Schools and universities have been closed. Wait staff and bartenders, barbers and hair stylists, actors and actresses and all types of performers, all suddenly without employment. Restaurants are only permitted to serve take-out and delivery. The entire travel industry, including cruise lines, airlines, resorts and hotels have all been affected because of the virus. That leaves only grocery stores, pharmacies, banks, medicinal Marijuana dispensaries and a few other businesses open to the public. It has been strongly recommended that we only venture out of the house to either exercise (while honoring social distancing of at least 6 feet from the person next to us) or to pick up vital provisions like medicine and food. The rest of the time we must stay indoors.

As we all adapt to this new normal, there is a massive cloud of uncertainty hanging overhead. It is unknown how long we will have to remain bunkered down in our homes, as we have never been here before – at least not on this scale. The Influenza pandemic of 1918 aka “The Spanish Flu” lasted almost two years and affected 500 million people, but that was at a time where we were a lot less connected than we are today. It did not take long for the Corona Virus to spread from China to all corners of the globe. In three months this little virus has caused BIG trouble planet-wide. And in its wake, families are left doing what they can to get by day by day. We all have to take precautions to stay healthy – both physically and mentally, as we are continually bombarded by the media with stories of woe and tragedy, leaving us feeling a bit helpless at times and very uneasy.

I am trying hard to keep a positive state of mind in all this chaos and focus on proactive measures aimed at ensuring a cash flow during this crisis. As a creative professional I have taken a financial hit myself. Film, television and theatrical productions have virtually shut down nationwide, leaving an entire industry in a state of limbo until this pandemic calms down. Some casting is still going on, with a majority of opportunities focused on remote from home work. The voiceover industry especially is thankfully still up and running, so at least I have that. But my video production work that helps keep me afloat has all but ceased for the time being, as many companies are focused on simply surviving this epidemic rather than moving forward with marketing initiatives.

As employees across the globe switch to working from home, that leaves many companies running a physical skeleton crew at their facilities, which means my avenues for sales calls are limited at the moment. The couple projects my partner and I do have on the books are pretty much on hold for the moment, as the ban on public gathering prevents us from actively filming anything right now. Additionally, the few nights a week that I work at a restaurant to fill in my financial gaps has also disappeared before my eyes, as there is a moratorium on in-person dining in effect until further notice. So given that I am relegated to staying home, I am switching gears and turning my attention to writing for the foreseeable future. I am hoping to snag some new freelance writing clients to help weather this all-encompassing storm as well as working on some creative writing projects that have been resting on the back-burner for a while.

I hope this crisis will not last too long, but however long it does last I am going to make the best of this window and work to be as productive as possible. I pray we will all get through this Corona Virus situation safely and most importantly healthy. God speed. 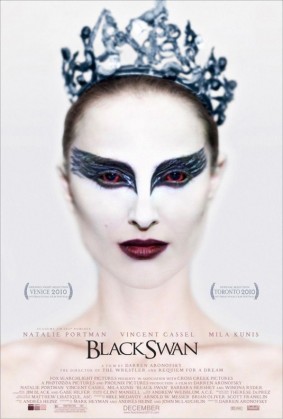 Black Swan is an intensely absorbing psychological decent into madness with Natalie Portman as Nina, a ballet dancer who is beginning to crack under the building pressure which comes with taking the arduous lead in a new production of Swan Lake. The pressure to be perfect is commonplace in the ballet; especially in New York City where after many seasons in the background, Portman’s Nina is finally given the chance to shine in two challenging lead parts, as the White and Black Swan roles respectively.

Nina’s mother Erica (Barbara Hershey), an ex-ballet dancer herself-turned painter, is overjoyed by her daughter’s ascension to the top of the ballet food chain but adds a layer of unneeded pressure onto her daughter’s already heavy shoulders. This coupled with the stern bluntness of the production’s seasoned director Thomas Leroy (Vincent Cassel); an intimidating genius who is not shy about flaunting his sexuality to his dancers, makes for an incredibly claustrophobic atmosphere for Nina. Additionally, Leroy urges Nina to be less rigid and uninhibited in the sexual arena to further immerse her in her roles. The film wades in sexual awakening and expression through most of the middle act, slowly building to a crescendo as Nina herself explores her primal hunger which has been dormant and very necessary for her to embody the essence of the Black Swan.

It is here that the film really immerses us in Nina’s mental spiral and we witness with her, the constant anguish of striving for perfection: the mental, emotional and physical discipline and constant fear of failure. The thrill and excitement of carrying the production on her shoulders eventually gives way as the pressure builds to growing anxiety and paranoia at the thought of being replaced by an understudy named Lily (Mila Kunis), who drops into the production out of nowhere both as friend and foe. Their relationship develops as adversaries, morphs into friendship and then jerks into darkness in ways I will not spoil but ones that will leave your eyes glued to the screen and in your thoughts well after you have left the theater.

All this weighs on Nina day and night as she pushes herself to be better with the looming production’s opening night just weeks and eventually days away. She dances, sleeps, bleeds and cries – that is her routine as she takes the spotlight. Nina knew it would be hard taking the lead after many seasons under the shadow of Leroy’s original prodigy and now retiring Beth (Winona Ryder), but as Nina slips deeper and deeper into mania, her grips on reality begin to crumble beneath her.

Black Swan features easily the best performance of the year by Portman and should ensure her the Oscar in a couple months. She trained for over a year for this film and it shows – physically and emotionally. She brings a heartbreaking realism to the role of Nina, a tortured girl whose desire to be perfect consumes her. Portman has come a long way since that little girl in The Professional (1994) and proves she is more than just a pretty young face. Like her performances in Closer (2004) and in last year’s Brothers, she shows us her vulnerability and her inner fire. I admire her dedication to the part and the discipline of training to be a ballerina. It is probably the hardest and most strenuous of the performance arts, as the physical toll your body takes alone is grueling, not to mention the constant mental and emotional turmoil that undoubtedly comes with it.

The supporting performances are all great as expected. The always cunning and menacing Vincent Cassel gives us another memorable character as Thomas; the sexier than ever Mila Kunis shows us another side of her we have not seen yet and Winona Ryder is powerful as Beth (it is good to see her back in films after several years out of the spotlight). And Barbara Hershey also delivers a terrific performance as Erica, an artist and mother struggling with lost dreams in light of her daughter’s realization of her own and as she lives vicariously through her daughter, she also sinks into the realm of madness in her own way.

This is another wonderful film by director Darren Aronosky who gave us the outstanding Mickey Rourke film The Wrestler a couple years ago (my favorite of Aronosky’s films) . He is one of the most absorbing directors working today; always different and inventive. He favors handheld camera work (The Wrestler was entirely handheld), vibrant imagery and stories about people rather than intricate plots (although his characters inner monologues can be very rich and complex). Here, he orchestrates the physical and mental world of a ballerina in turmoil perfectly and like in The Wrestler, Requiem for a Dream and π, Aronofsky gives us a likable protagonist with demons who descends into darkness.  He is obsessed with the mind and with human behavior and chooses to examine us as a species in diverse walks of life and afflictions. I read that initially a few years ago, Aronofsky wanted to make a film about a wrestler that falls in love with a ballerina. I am sure that would have been an interesting film, but I am happy things turned out the way they did.